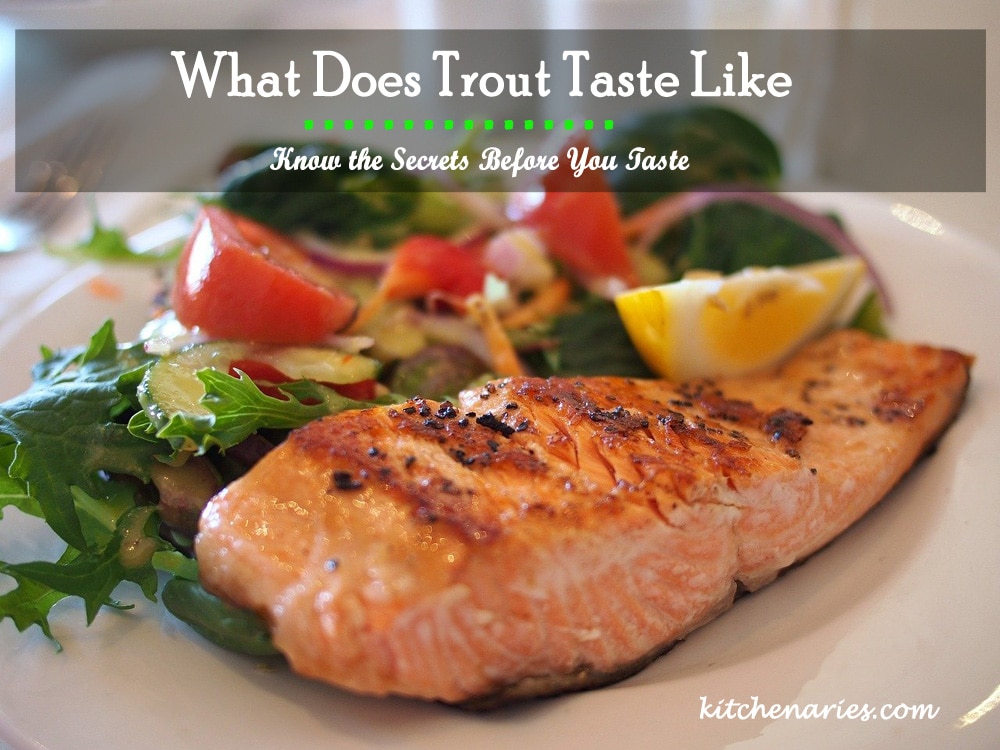 Different people hold varying ideas of what like various foods taste. It because of this reason, some like specific foods and others may hate the same food. There are various species of fish found all over the world and have different tastes. What does trout taste like?

The fish taste chart indicates that trout has a mild flavor and delicate texture on its flesh. Trout meat does have a sharp “fish-like” taste and easily separates into small delicious pieces. Did you ever have a taste on a piece of a catfish or chicken? It is the same taste from the trout. Trout is one of the types of fish found in fresh water. Scientifically, it belongs to the family Salmonidae and subfamily Salmoninae. Trout live in different environments from lakes to rivers; hence they tend to have different patterns and colors. Also, their habitat will determine how they taste and how long they grow.

Trout has been a source of food for ages. This kind of fish is a bit bony, but it holds a lump of delicious meat. They are also considered to have a high nutritional value. Among nutrients from trout include Omega-3, low fats, proteins, vitamins, and minerals such as potassium. Don’t you deserve a trout as part of your diet? Many opinions define the actual taste of this oily fish. As mentioned above, there are different types of trout; hence they have varying taste. That means there is no precise taste for trout.

Trout has that medium flavor. It does not have a strong and distinctive flavor of fish or that deep flavor that tastes like ordinary meat. A piece of pink meat from trout and prepared with a usual recipe will not scare you away from easing it. With reference to the fish taste chart, trout has a delicate texture.

However, defining the actual taste of trout will depend on many several things. Trout cooked in a certain way is of significance to others. They may like it or completely keep off.

They include the following:

To determine the actual and natural taste of the trout, avoid adding flavored spices. A simple recipe will include cooking oil, squeezed lemon juice, and some salt to taste.

Rainbow is one most eaten species of trout. It’s a typical diet in American households. However, you should not confuse this particular trout with Steelhead trout. Both are of the same species and tend to be share a lot of similarities, but they still have different flavors. What does rainbow trout taste like?

In the above topic, we discussed the factors which would determine the actual taste of trout. Rainbow trout is not an exception to the same elements. Contrary to other varieties of trout, it has a mild-flavored taste. Also, it has a delicate meat texture with a sweet and buttery taste. In short, it does not contain a strong flavor of its own, precisely the kind of smell you can easily tell that you are eating fish. Some people say that this kind of trout has a similar flavor to that of nuts.

It does work very well for those who do not love eating fish because of the smell. Rainbow trout will fill that part of your diet. From different experiences, this particular kind of trout tends to have a more delicate flavor and odd texture. The flavor is milder similar to that of fresh oranges. It also does not have that fishy taste. However, farm-raised steelhead trout will taste different. About the texture, it is tender. It is a pleasant diet enjoyed in many households on its own or in soups and salad. 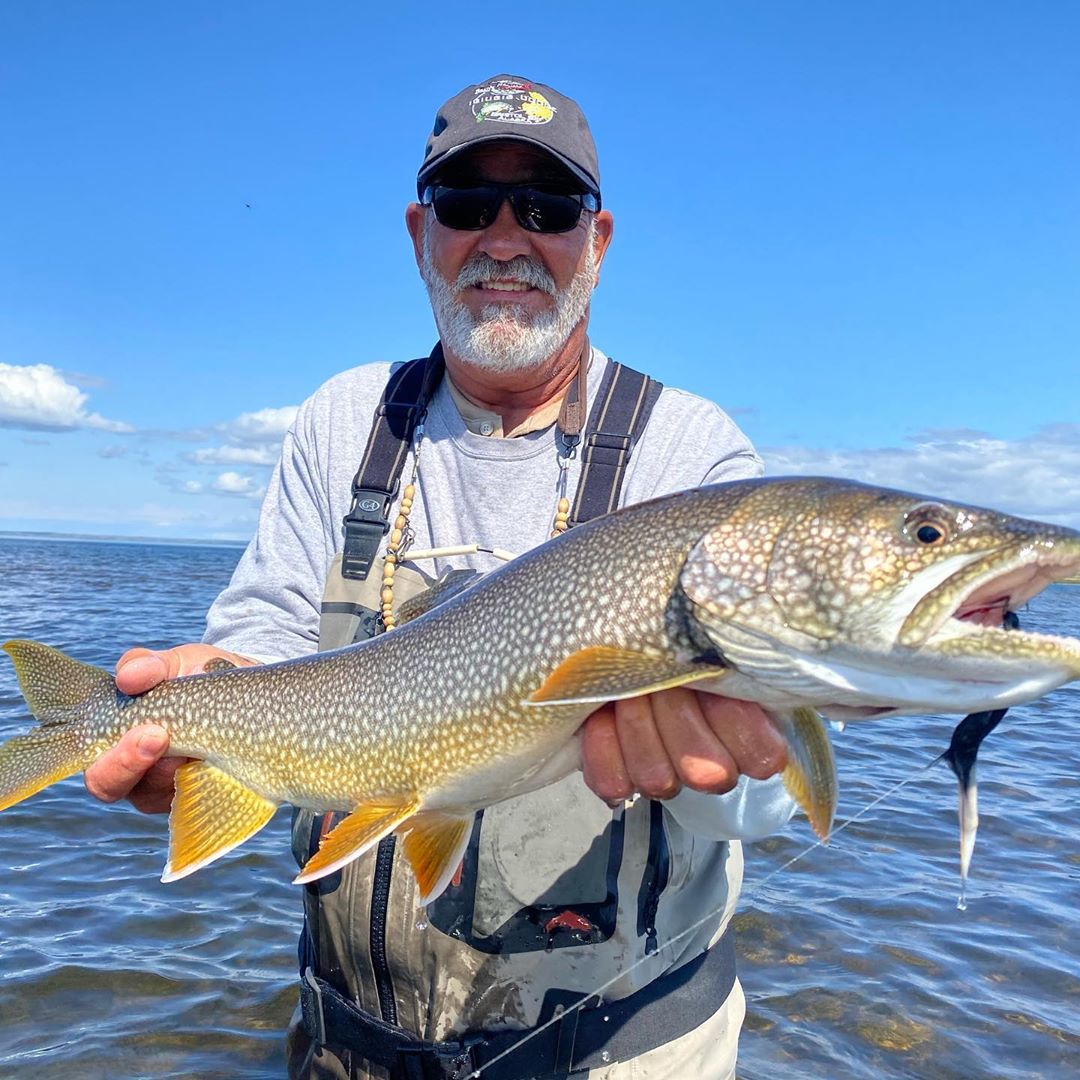 Most lakes are freshwater sources; thus, trout do habitat in such environments. Lake trout will taste differently depending on the freshness of the fish, how well it is skinned, ingredients used, and the method you use to prepare it. Also, size is a factor that influences the taste, but you can hardly notice it.

Most of the people think that lake trout are too oily and have a “fish” tasting flavor. It could be right for some species of trout, while for others, it may differ. What is the differing factor? Well, it includes the depth it grew from, levels of coldness in the water and kind of water in that lake.

Deciding on the actual taste will depend on an individual’s opinion and the kind of experience he/she may have with the lake trout. Also, the above-discussed factors are very vital in determining the actual taste you get after preparing your trout. 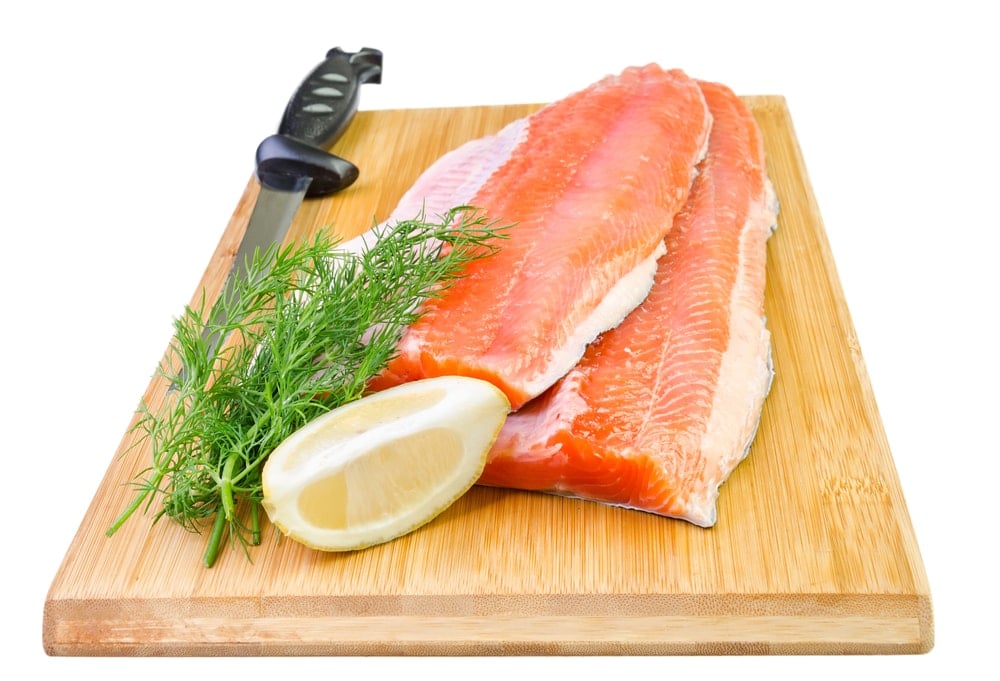 Most of the sea trout comes from salty waters. Most sea trout tend to have different flavors due to the high production of amino acids. It tends to have a mild-flavored and a delicate texture. However, just like other types of trout, they do not have a fish-like taste. While cooking, it will not need a lot of seasoning. It has light-textured flesh. No doubts that it help you prepare your best recipe.

Like many other trout species, the exact taste of sea trout will depend on the species, cooking method, freshness, and type of water the trout was caught from. Trout has a different taste from that of salmon. The two share similarities that make it much more confusing to many people. Can you tell the difference between the two before you taste? They tend to have a similar physical appearance, which has made many people confuse between the two. However, the main difference is that they hold different flavors.

Well, salmon is much more sweater due to its distinct flavor. Also, it has a delicate and flaking flesh. On the other hand, trout has a mild flavor with subtle texture on the meat. The mild nature of the trout makes it easy for seasoning and can taste great with different ingredients. The uniqueness of trout is that the taste will change depending on the route they take during migration as part of their life cycle. A rainbow trout or steelhead trout that migrates to salty waters facilitates an increase in the number of amino acids, therefore, affecting the taste.

The two are known to be rich sources of healthy Omega 3 fatty acids. If you are not used to eating the above two types of fish, you can hardly tell the difference even if you taste. Some sellers also experience a hard time trying to label the two, which even mislead their customers. “Salomon is salmon and trout is trout” despite the similarities they share.”

Watch this Salmon And Trout Hatchery Documentary to check how salmon and trout are hatched.

Different people have different opinions about the question, what does trout taste like? We have elaborated on the various factors that affect the varying palates. Also, the specific species and life cycle of trout are significant in a journey to find the answer to what trout taste like.

From a cooking aspect, baked, smoked, and fried trout seems to taste best. A large number of people around the world like it that way.

The specific species favorite for many as a result of taste is the Brook Trout. Also, a significant number will go for the rainbow trout. They are affordable and readily available.

Trout make great recipes from home to restaurant. People like in with different ingredients to achieve different tastes. Trout is a delicacy with valuable nutrients to your body.